A soldier’s moving tribute to his baby girl during the First World War has been turned into a powerful exhibit at the Canadian War Museum in Ottawa.

Flowers became a symbol of hope to Lt.-Col. George Stephen Cantlie, who served with the Royal Highlanders of Canada during the First World War. While in France, the Canadian soldier picked flowers from the trenches and battlefields to send to his one-year-old daughter, Celia, and his family in Montreal.

In his handwritten letters home, Cantlie referred to his daughter as “wee Celia” and added, “Much love and lots of kisses from Daddy,” CTV News reports.

Cantlie’s daughter and granddaughter, Elspeth Angus, preserved the dried blossoms he sent, and now, a century later, 10 of the artifacts are on display in the Canadian War Museum’s War Flowers exhibit.

Filmmaker Viveka Melki curated the moving multi-sensory display to highlight 10 personal wartime stories that give insight into human nature. Each of Cantlie’s flowers represent one story, such as daisies, which are used to symbolize the lost innocence of Quebec armed force officer Jean Brillant, who died in battle, but was awarded the Victoria Cross for his contributions to the 1918 Battle of Amiens.

“The exhibit is not about battles and munitions, death or destruction, it’s more about the people and the effect the war had on them and their personality,” explained historian Alexander Reford, who helped Melki with the display.

According to Melki, “the goal of the exhibit was to make history intimate.” As a result, she curated the display with all senses in mind to create an emotional experience for the viewer.

In addition to being visually appealing, War Flowers also includes an olfactory component where certain smells are released at the push of a button to trigger memories.

“War Flowers is an extraordinary example of art’s power to enrich our understandingand experience of history in unexpected ways, while providing diverse perspectives on Canada’s contribution to the war effort,” said Canadian War Museum director, Stephen Quick, to Artsfile.

With Remembrance Day right around the corner, this exhibit is a powerful reminder of the contributions and sacrifices Canadians made in order to help bring the First World War to an end.

War Flowers is on display in Ottawa until Jan. 7, 2018, but is slated to move to Toronto, followed by France next spring and Montreal in July, CBC reports. 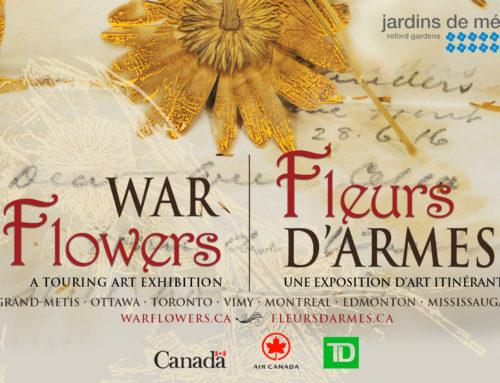