I believe that grief is internal while mourning is public.

Poet, soldier and doctor, John McCrae ministered to thousands of casualties in a vast Canadian General Hospital in France. Exhausted, he succumbed to pneumonia in 1918. He was buried near the hospital where he had worked unselfishly to save the lives of many soldiers.

McCrae wrote these now famous words after the death of a close friend: “We shall not sleep though poppies grow, In Flanders fields…” It was an act of private grief that was made public, appearing in print for the first time in 1915 in Punch magazine. His poem lives on, helping to make the poppy an enduring symbol of remembrance.

John McCrae is the one combatant of the First World War who requires little presentation. He is immortalized in Canada and Commonwealth countries on November 11 of every year. His authorship of the 1915 poem “In Flanders Fields” made him famous during his own lifetime. His evocation of the war is one of the most widely known and recited poems in the English language. The poem gave rise to the donning of the poppy as a solemn symbol every year and as a badge to those dedicated to keeping memory alive.

But while Canadians recognize McCrae’s words, they know little about his dual career as both a soldier and a surgeon. McCrae served as a soldier for much of his adult life, joining the cadet corps and the militia as a young man and taking leave from his medical studies to serve as an officer in the Royal Canadian Artillery during the South African War. When war broke out in Europe in 1914, he was on the staff at the Royal Victoria Hospital in Montreal and a lecturer in medicine at McGill University. He went to France as a major and a military doctor.

McCrae wrote “In Flanders Fields” after the death of a young friend and fellow officer, Alexis Helmer, in May, 1915 at the Second Battle of Ypres. It was published in Punch magazine in December that year. It became the best known of the war poems.

McCrae was appointed in May, 1915 chief medical officer of the No. 3 Canadian General Hospital (McGill) in Boulogne, a vast facility with 1,560 beds. He spent the next two and a half years ministering to the wounded.

The daily work in the hospital was grinding and demoralizing. The machinery of war had reached new levels of sophistication. Shrapnel-emitting mortars and mustard gas meant that soldiers arriving in military hospitals were often severely maimed and debilitated. A surgeon’s intervention was often too little and too late. Their work was often limited to calming the wounded or offering morphine to lessen the pain before an inevitable death.

McCrae himself suffered from asthma and bronchitis. He finally succumbed to pneumonia. He was buried very near to the hospital where he worked with the full honours bestowed on one of the war’s most remarkable warriors and doctors.

McCrae is the subject of many biographies and testimonials. For a bibliography and a brief life, consult the biography in the Dictionary of Canadian Biography: http://www.biographi.ca/en/bio/mccrae_john_14E.html

“In the aftermath of battle two medics care for the wounded, while above poppies float
and fade into the night sky.”
– Mark Raynes Roberts

“John McCrae is the one combatant of the First World War who requires little presentation. His authorship of the 1915 poem “In Flanders Fields” made him famous during his own lifetime. His evocation of the war is one of the most widely known and recited poems in the English language.”
– Alexander Reford 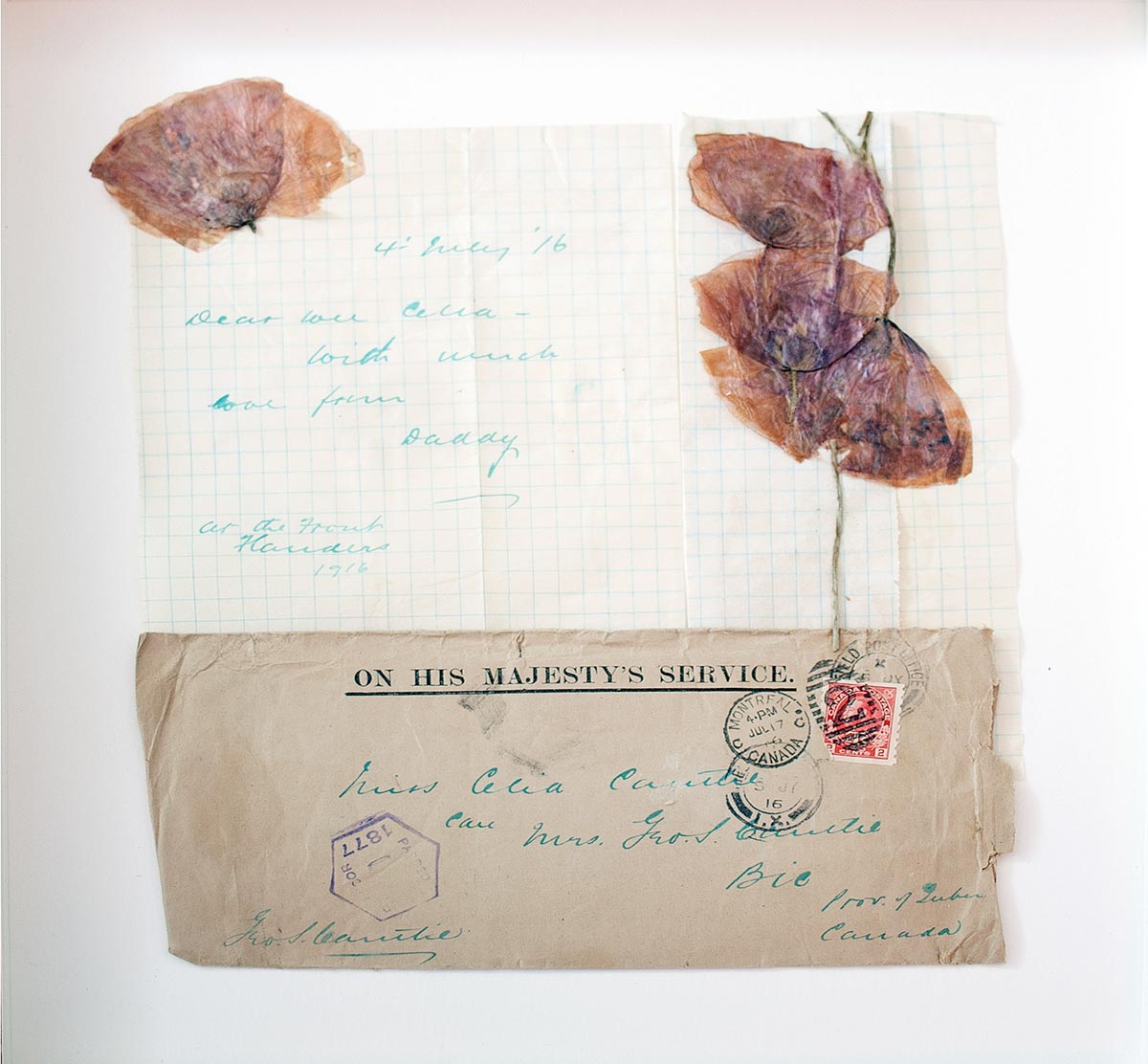