Canadian War Museum: Exhibition of the flowers of war tells a special message

More than 100 years after the beginning of the First World War, the story of a Canadian soldier’s love for his daughter — along with the flowers he sent home to her — have inspired a touring art exhibition called WAR Flowers.

The exhibition was curated and developed by Viveka Melki and les Jardins de Métis/Reford Gardens in Grand-Métis, Que., with the first stop of the tour taking place at the garden.

Now on display at the Canadian War Museum, the exhibition consists of multi-sensory displays that tell the history of conflict, sacrifice and perseverance, as well as the stories and experiences of Canadian men and women whose lives were touched by the First World War.

Melki has dedicated the past four years of her life to the story of George Stephen Cantlie, a Canadian soldier from Montreal who picked flowers from the fields and gardens of war-torn Europe  to send home to his baby daughter, Celia.

“I came across the story because I’m actually a documentary filmmaker, that’s what I do, and so I was working on another project when I came across the box of letters and flowers. They belonged to a woman named Elspeth Angus,” Melki said. Elspeth was Cantlie’s granddaughter. 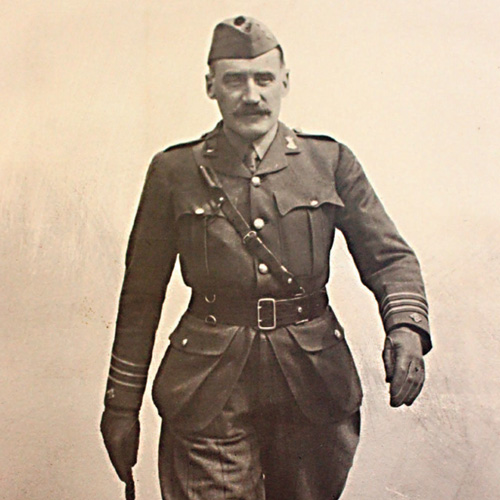 Melki said she was inspired to tell the story through floriography — a Victorian method of communicating meaning and emotion using flowers.

“The exhibition surrounds you by an experience, whether it’s sound, touch or smell,” Melki said. “The goal of WAR Flowers is the emotional experience, and so all of the exhibitions work in a non-logical sense, meant to trigger and evoke personal memories.”

The gallery contains 10 stations showcasing a specific theme. Each station is built around a set of preserved blooms. It also features the story of a Canadian touched by the war, carved optical crystals and a button, that once pressed, releases a certain scent into the air. The names of the 68,000 Canadians soldiers who lost their lives in the 1914-18 war are listed on posters in the gallery.

“WAR Flowers is an extraordinary example of art’s power to enrich our understanding and experience of history in unexpected ways, while providing diverse perspectives on Canada’s contribution to the war effort,” said Stephen Quick, director general of the Canadian War Museum.

Alexander Reford, director of les Jardin de Métis/Reford Gardens, has worked with Melki throughout the project, writing condensed texts to support the personal narrative at each station. He had previously worked with Melki on a separate film project.

“The exhibit is not about battles and munitions, death or destruction, it’s more about the people and the effect the war had on them and their personality,” said Reford.

Reford says the subjects in each station had a connection to Quebec. This is important to see, he said, because there is still a lot of debate in the province about why Canadians were fighting in the war at all. Conscription was strongly opposed in Quebec and created a domestic political crisis during the war.

“We were a little concerned about the reaction, but this is a non-political, non-declaratory exhibition — it doesn’t take positions. We describe some events of conscription, but it’s really about the people that went to war as opposed to why they went,” Reford said.

Melki collaborated with several artists. On her team were Mark Raynes Roberts, who designed the crystals; Alexandra Bachand, who developed the scents; botanist and archivist Céline Arseneault and Normand Dumont, who oversaw the design and layout of the exhibit.

Dumont, originally a cabinet maker, worked in the film industry for several years in Montreal, developing movie sets. He has previously worked with Melki on a short film.

“We basically wanted to pay tribute to these guys because they gave their lives for us,” said Dumont.

Dumont attended the opening event in Montreal in June and said he was blown away by the reception the exhibit received.

“The response was great. This is a very different way of presenting war because it’s more poetic. I think we all did a great job and people are really going to have a different perspective,” he said.

The commemorative exhibition officially opened to the public on Oct. 20 and will remain at the War Museum until Jan. 7, when it will make its way to the Campbell House Museum in Toronto. The exhibit is also scheduled to appear in France.

This story was produced in collaboration with the Carleton University journalism program and Centretown News.